My Experience With 2020 Hurricane Sally

You hear about it – the power outages, the devastated homes and displaced families, the millions of dollars in repairs – but you never really understand it until you live through it.

You hear about it – the power outages, the devastated homes and displaced families, the millions of dollars in repairs – but you never really understand it until you live through it.

I’ve lived in Fairhope, Alabama for just over half my life. It’s a small town on the coast of the Gulf of Mexico known for its food, small businesses, and picturesque views of Mobile Bay. It’s surely idyllic, and almost seems like nothing bad could ever happen here.

That all changed in September of 2020, when Hurricane Sally found its way up into the Gulf and made a beeline for the coast of Alabama and Mississippi. People living on the southern coast of Alabama are wary of hurricanes, for the footprints of the 2005 Hurricane Katrina can still be seen in neighboring states. Boarded up windows, sandbags, and extra gallons of gasoline and water are tell-tale signs of a hurricane, and most people living around here know these essential preparation tips. However, most of my community was highly unprepared when Sally struck. Even people who had lived in Fairhope their entire lives were rattled. No one expected it to be quite so bad.

Fairhope took the brunt of the storm, for we were in the right hand side of the eye, which experiences stronger storm surge and higher rainfall. When the storm made landfall, it was a category 2 hurricane with winds of 110 mph. (This is 1 mph short of a category three storm. Categories are based on a range of wind speeds, and go from category one to category five.) We had at least 20 inches of rain in just a couple hours and overall damages from the storm are estimated at about 7.3 billion dollars.

You can look up all this information on the internet, but you can’t find much about how the storm actually affects people, aside from a couple interviews. Wikipedia doesn’t mention how loud the flying debris is as it is flung against your window. It doesn’t describe the popping and banging noises of a tree falling on your house. It doesn’t convey the fear a family feels all huddled together in their pantries or bathrooms as the wind screams outside. I’ve never heard wind howl that loudly. And the internet definitely doesn’t provide a guidebook on how a community can deal with the aftermath of the storm.

Meteorologists had been tracking Sally in the days leading up to her landfall, and anticipated that the hurricane would not be worse than maybe a category one when it hit. In the past, Fairhope locals had prepared for the worst but not much ended up happening. Maybe the storm broke apart before it hit land or was redirected elsewhere. So no one was really expecting a category three direct hit. My family, however, didn’t grow up in Alabama, so the word “hurricane” always puts us on edge. We have always boarded up each window in our house (we store the thick wooden boards in our garage year-round) and had bought extra water days before the storm. I remember it being a bit difficult to find disaster supplies because a lot of them were already picked over due to the pandemic. Luckily we already had extra gallons of water and first-aid kits. I also remember the panic to buy gas. 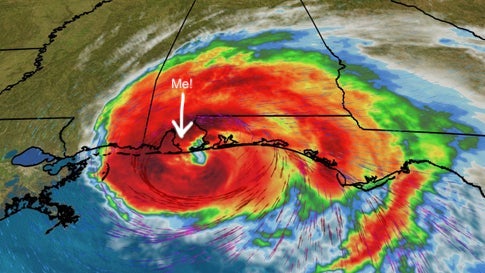 The afternoon before the storm, the local gas station was packed. Gas was not only used for getting out of town but also for generators, which people would rely on for electricity if the power went out. There was a lot of last-minute panic and frantic preparation, and a lot of key details were likely forgotten in the process.

The day before a hurricane or major storm is always a nice temperature and sunny. Unsuspecting.

BANG. BANG. I awoke disoriented at just after four o’clock in the morning to a sound I’d never quite heard before. It took me a second to realize it was thick tree branches banging on the window and walls of my room. The rain was so forceful it sounded like tiny pebbles hitting the window and the wind was wailing. There was no going back to sleep so my family and I made small cups of coffee on our gas stove (it didn’t take long for the power to go out so the coffeemaker was no use) and huddled around our little battery-powered weather radio. All we could do was watch and hope that none of the water oaks in our yard were torn out of the ground and hurled at our roof.

The storm stuck around for a couple more hours and then suddenly, just like that, it was gone. But it had been merciless. I think around three quarters of the houses in my neighborhood had trees on the roof. Huge trees had fallen onto power lines or on the road. Soon enough my neighbors and my family stepped out into the street to assess the damage. We spent the rest of the day together dragging tall branches and piling up broken tree bits. My dad brought our chainsaw around to the houses in my neighborhood, helping others saw trees off their houses. It was truly a team effort, and even now, almost two years later, my community is still cleaning up from Sally. It took all of us.

The power, air conditioning, and wi-fi was out for at least a week. And September in Alabama is hot. A couple people had portable AC units, but not many of us. Our neighbors shared their generator with us so we could blast fans and turn on LED lamps. We had to eat up anything perishable in our fridge and boil our drinking water on our gas stove. My community definitely wasn’t prepared for the wake of Sally, and it’s made me realize just how important preparation and community resilience efforts are. We were lucky we lived in a kind neighborhood and had prepared ourselves for the hurricane, buying extra gas and water.

This experience has made me think differently about extreme weather preparation. Things can change in an instant, and it’s not hard to be underprepared. Whether it’s flooding, heat, or a hurricane, having everything you need is crucial. Ultimately, lending a helping hand to a neighbor can mean so much, and not underestimating Mother Nature is imperative as we run head on into rising temperatures and whirling storms. Looking to the future as we head into another busy hurricane season, I hope my community can be better prepared and equipped to deal with such a disaster.

Community was vital, and that’s why Communities Responding to Extreme Weather (CREW) is so important. CREW fosters community connection and teaches neighbors how to best prepare themselves for extreme weather. As we progress into the coming decades, this work is going to be crucial in standing a chance against climate change.